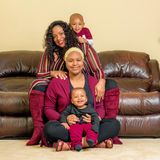 Listen to "Episode 000 - Pregnancy After 40 - Introduction Episode" on Spreaker.


When Host, Michelle Johnson, became pregnant at the age of 40, she immediately scoured the internet for pregnancy information for women her age, only to be inundated with daunting statistics and risks from medical professionals, individuals and articles. Not succumbing to all of the negative information, Michelle began a private Facebook Group to both give and receive encouragement to other women in the same situation. Since that time, Michelle gave birth to 2 sons, one at 41 and the other at 43, with a miscarriage in between. Having a daughter at the age of 25 from a prior relationship, Michelle brings her perspective of being a single parent, getting pregnant naturally and having 2 children after the age of 40. She also shares her experiences of miscarrying, having a subchorionic hemorrhage, acid reflux, gestational diabetes, swelling, fetal growth restriction (IUGR), being induced and other pregnancy after 40 issues during her pregnancies. She also talks about her journey from creating the Facebook Group, Website, Articles and now this Podcast. Tune in to this introduction episode to hear more about Michelle and the Pregnancy After 40 Podcast.


Michelle Johnson:
Hey, everyone, thank you so much for tuning in to the Pregnancy After 40 Podcast. I am your host, Michelle Johnson, and I'm so excited to finally get this podcast up and running. Before you start your first podcast, I want to take a few minutes to introduce myself and talk about how we got here. So, a little bit about me, I have three children. I have an 18-year-old daughter who I had when I was 25 from a previous relationship and a 2 year old who I had at 41 and an 8 month old son who I had at 43.

I conceived all my children naturally but like many of you, I have also experienced a miscarriage. Before my current pregnancy, I miscarried in April of 2019 and basically after expelling that baby out completely my OB advised that I should wait one full cycle before trying again, which I did. And we ended up conceiving this baby in June 2019 after tracking my fertility on my Ovia App.

My husband and I were absolutely heartbroken when we miscarried last year, something many of you can relate to. But I also wanted to encourage you to keep trying, there are women who have miscarried many more times than you or I have but even eventually had the rainbow baby or babies just like I have.

What I really want to talk about though is how we created our “Pregnancy After 40” community.

So, shortly after I became pregnant at the age of 40 with my son, I immediately scoured the internet about being pregnant over the age of 40.If you're anything like me, you probably did the same thing.

You likely saw all the daunting statistics about even becoming pregnant after 35, let alone 40. And if you're lucky enough to get pregnant after 40 and the chances of a successful pregnancy and healthy baby or even smaller, so I’m like Wow, this just can't be. I've heard countless stories of women having babies over 40 and couldn’t comprehend all the negativity surrounding pregnancy in your 40’s. So at first, I began writing small little blogs about my pregnancy at 40, 41 about how it was different from my pregnancy when I was in my 20s and the ailments that I had never experienced with my first child.

Some of those blogs you will be able to see and read on the website. With my first son that I had at 41, I had serious acid reflux, constipation, some extreme swelling. And my son was diagnosed with IUGR which is a growth restriction of the babies who's measuring small throughout my pregnancy between 8 and 13% for the entire pregnancy. These are things I had never experienced with my daughter when I was pregnant with her at 25 or had her at 25. Ultimately, though, I had a healthy baby boy in summer of 2018 who weighed 7lb and 2 oz.
Despite having a small case of Jaundice which cleared up in a few days and he also had Hypospadia which prevented him from having a circumcision while we were still at the hospital.

In the summer of 2018, about two weeks after I had my first son, I started our amazing community. I was literally nursing my son in my arms and I had my phone in my right hand as he fell asleep in my left and I created the “Pregnancy After 40” group and Instagram Page. Initially I would post all of these articles about anything positive regarding having a baby over 40 from celebrities to everyday people like me. I made a conscious effort to encourage other women who are either pregnant or thinking about becoming pregnant after 40 years old.

Funny enough, the first member of the group was one of my old college roommates, who happened to be pregnant over 40 as well. She's on an upcoming episode so you can hear her story a little bit later. My old roommate invited another friend of hers who was also 40 and pregnant. And the rest is, as we say, is history.

Today we have over 5,000 members and it is growing every day. Fast forward to my most recent pregnancy. We conceived him after I created the “Pregnancy After 40” Group when I was 42 and I delivered him at 43.
But like I said before, I had a miscarriage 2 months before I conceived my youngest. As a result of that miscarriage this last pregnancy was incredibly stressful for me and I was full of anxiety throughout the entire pregnancy.

First, I had a Subchorionic Hemorrhage during the first trimester, which caused me to spot and bleed a few times, and made me think that I was miscarrying again.

Fortunately though the hemorrhage resolved itself with cervical rest. A few weeks later, I was diagnosed with Gestational diabetes.. Initially the specialist prescribed Metformin for me. At first it was a low dose of 250 milligrams, and he increased it to 500 and then it was 1,000. I never took more than 250 and that was within the first couple of weeks. That doctor insisted my sugar levels were going to rise throughout my pregnancy, and he was absolutely wrong. I quickly changed my diet after finding out that I was diagnosed with Gestational diabetes.

I figured out what worked for me in my diet, when I should eat and what I should eat. The doctors finally agreed to take me off the meds after about a month, since my numbers were under control and remained relatively under control.

I was also sick for about 2 months at the end of 2019 with a cough that would not go away. I tested negative for the flu and wasn’t diagnosed with anything specifically. So that added to my stress. Ultimately though, the labor, delivery and birth of my youngest son was the best. I had a specific birth plan going into the hospital and was carried out. I delivered vaginally but it was overall painfree – just the way I wanted it!

I do think that he was induced a little too early though, as when he was born, he had jaundice that required us to get his bilirubin levels tested everyday at the hospital for the first 2 weeks of his life. He was extremely red for the first 2 months for no apparently reason – he looked liked a beet and no one could tell us why. He also had labored breathing, especially when he slept, again for the first couple of months, but his oxygen levels were shown to be normal. He also had thrush, which took like 2 months to resolve despite a prescription and my own little home remedies. At the end of the day though, he’s a healthy and big baby. He’s now 8 months and wears 12 month tops and 18 month bottoms – we’re just going to assume its all that good breastmilk!

Anyway, I want to thank all of those who joined the Pregnancy After 40 Facebook group, and to those of you that have offered your stories, your journeys and advice to other women who are in a similar situation. I especially want to thank all the members who have joined us as guests on the podcast and share their stories as well.

Every woman has had a different experience, whether they became pregnant naturally, IVF, IUI, donor eggs, natural delivery, medicated deliveries, and a host of other issues that I've never experienced personally. All of you ladies are amazing and you absolutely rock. I hope you thoroughly enjoy these podcasts. And if you ever want to be a guest on an upcoming podcast, please let us know.

Also, please be on the look out for our new “Pregnancy After 40” Panels where we bring in fertility, pregnancy and newborn experts and specialists and you get a chance to ask them your questions about things like how to increase your fertility, common pregnancy symptoms, genetic testing, birth plans and options, midwives, doulas, new born must haves and many more.

So with all of that being said, our contact information is in the podcast notes, but you if want to write it down now our website is www.pregnancyafterforty.com. That's 40 spelled out. Again, www.pregnancyafterforty.com. You can contact us via email through the website. Our Facebook group is “Pregnancy After Forty Private Group” again with 40 being spelled out. You can also listen to our podcasts by going to our website or on your favorite podcast platform such as Apple Podcasts, Spotify, Google Podcast, Podcast Addict and several more. I truly hope you enjoy the podcast episodes and continue to listen and are encouraged or encourage others in your pregnancy after 40 journey. Thank you.