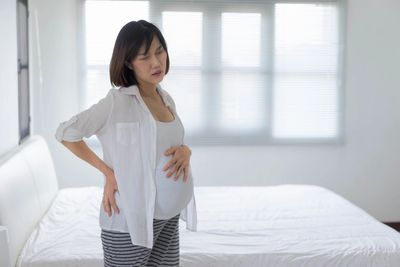 Acid reflux is one of those things that commonly occur during pregnancy which can just be irritating. Prior to getting pregnant at 40, I rarely experienced acid reflux and did so with such infrequency that I didn’t even have an over the counter reliever at home to relieve me of it if needed. I also don’t recall experiencing acid when I was pregnant with my daughter when I was 25.

When to Expect Acid Reflux During Pregnancy

But this time around was a totally different story! Shortly after entering into to my second trimester acid reflux started to become a daily experience. Of course I started to do my research on it and confirmed that acid reflux and indigestion was in fact a common pregnancy woe.

What is Acid Reflux?

According to the Bump, acid reflux occurs when “stomach acid doesn’t stay put in your stomach and creeps up into your esophagus. Acid reflux is more common in pregnancy because progesterone, the main hormone of pregnancy, slows your digestive system. That, combined with the pressure of a growing baby, increases the possibility that stomach acid will make its way upward.” (https://www.thebump.com/a/acid-reflux-during-pregnancy)

I’ve been relatively healthy throughout my life and rarely take any medication be it prescription or over the counter. So before I started taking anything and after research, I asked my doctor’s office what I could do to alleviate or reduce my acid reflux. I was told that I could take Prilosec and Tums, with Prilosec being taken every day at the same time in order to reduce the occurrences of acid reflux and take Tums when needed.

Ultimately though, once the Tums no longer did the trick, I started taking Prilosec AND IT WORKED WONDERS!!!

I only needed to take Prilosec 2-3 times a week after the acid reflux returned. Now, it did take a about 12 hours for it to kick in, but it lasted several days. When the Prilosec wore off, I would supplement with Tums, again, until the Prilosec began working.

Reducing Chance of Getting Acid Reflux

You can also follow the common advice given by most professionals that reduces acid reflux, including:

3) Don’t lie down immediately after eating;

It is important to note though, due to the baby growing continuously throughout your pregnancy and putting pressure on your stomach, acid reflux is a common pregnancy ail which may not subside until after the baby is born. Do what you can to decrease acid reflux conditions, but some of you may have to accept that it is here to stay until your baby arrives and you may have to just get used to it.