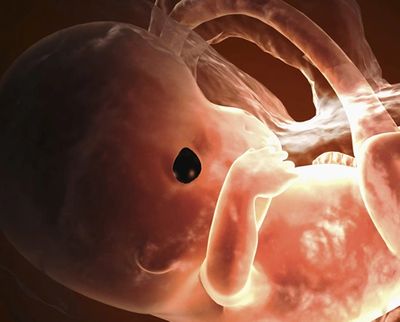 Ahhhh, the first trimester! The first trimester during pregnancy is extremely exciting, because after all – we did it! On the flip side though, it can be also be difficult regardless of any woman’s age. Here’s how mine went….

My first “kind of” pregnancy sign was the middle of October 2017, before I knew I was pregnant, when I went to the bathroom and after wiping myself I noticed a pink discharge on the toilet tissue. This struck me as strange as my periods have been consistent every month for years and I never spotted or bled unless I actually had my period.

I’m an avid seeker of information, so I immediately started researching “pink discharge” on my phone when I returned to bed. I saw numerous articles stating that this may be “implantation” or the fertilized egg implanting itself in the uterine wall after it has entered the uterus. Not being completely sure though, I didn’t tell Leslie, my now husband, that we might be pregnant.

Another week or so later I took a pregnancy test, two days after my period was due – negative test result. A week later, after my usually regular period still did not arrive, I took another pregnancy test – this time it was positive! I immediately, yet calmly called Leslie upstairs and told him. I was super nervous, but he quickly embraced and hugged me calming my nerves.

I knew the risks of miscarriage though, especially at my age of almost 41 years old, so I did my best to avoid stress, which wasn’t the easiest thing to do as a solo practicing attorney. I avoided situations which would have gotten me emotionally aroused – especially family or friends seeking freelegal advice, work and/or representation while I still have an insane amount of student loans debt. I digress. Nevertheless, I was looking forward to our first OB appointment in the beginning of November 2017.

My first visit disclosed that I miscalculated the first day of my last period and the doctor calculated that I was about 6 weeks pregnant according to the ultrasound – not as far along as I initially thought. The first ultrasound confirmed the pregnancy but there wasn’t much to see. So the doctor scheduled for me to come back right after Thanksgiving to get a better look.

It was early but I was still super excited, until around 8 weeks into the pregnancy. The day after Thanksgiving, I had another pink discharge moment and I freaked out!

You couldn’t tell from my demeanor but I thought I was having a miscarriage. I told my mother what happened and she asked if this was around the time that I normally have my period. It was and told her the same. She replied that spotting was not unusual in the early months of pregnancy, especially if it happened around the time you normally get your period.

I hadn’t seen that information in any of my internet searches but “mamma” was right. It only happened during that bathroom trip and not again since.

Doctor Warnings of Being Pregnant After 40

A few days later I had my second OB appointment. I was 9 weeks pregnant and the ultrasound showed very distinct body parts and a bobbling head. I was so relieved to know that everything was okay with the baby and I was temporarily at ease again.

That was until the doctor gave me the dreaded “you’re old and there are increased risks to you and the baby at your age.” Also, I was advised to refrain from taking baths for the remainder of my pregnancy (this is not an absolute though, as my subsequent OB disagreed with that statement and gave me the green light to do so in my second trimester). Obviously my heart dropped, again, as no one wants to hear that you’re a “geriatric pregnant woman.”

The doctor told me that I would have to be referred to a Fetal Maternal Specialist because pregnant women over 35 and then again over 40 are at an increased risk of having children born with Down Syndrome, Autism or not at all and not to mention Gestational Diabetes and reeclampsia, which are life-threatening conditions to the unborn baby and expecting moms. My excitement quickly turned to nervousness.

From Knowledge to Anxiety

They say knowledge is power, but in this case I actually preferred being somewhat less knowledgeable and powerless to avoid that stress – which is why it is vital to be relatively stress-free when you conceive, because pregnancy brings a massive amount of physical, emotional and mental stress.

The one thing that kept my spirits up though was following the development of my growing baby. There are many sites out there that do this, but my site of choice is and was Babycenter.com. Week by week there’s tremendous development of both you and your little one.

It also helped to know that once I reached the 12 week mark, also the end of the first trimester, that the risk of miscarriage decreased significantly.

Throughout my pregnancy, especially during the first trimester, I tried to compare it to my pregnancy from 15 years ago. Word to the wise – don’t do that. Every pregnancy is different!

There were 2 similarities that I observed though. First, I cramped a lot during both pregnancies in the first trimester – this is totally normal as the uterus is expanding daily to accommodate the growing baby. Second, I had minimal sickness both times, which was awesome!

However, the difference between the two pregnancies was 1) Per my husband, I started snoring – LOUD; and 2)  The spotting or pink discharge that happened a couple of times this pregnancy. The second time being more of a concern because I knew I was in fact pregnant and that I had an increased miscarriage rate. At the end of the day though, I was fine both times when I spotted.

Overall, during my over 40 first trimester I had minimal sickness and physically I felt great. I was overweight before my pregnancy and I didn’t want to gain too much weight during the pregnancy so I began walking and exercising again.  I took a prenatal vitamin daily and made sure not to eat too much. I actually started losing weight during my first trimester – beware though – this ended up being a problem during my 3rd trimester, which I will discuss further in the “Growth Restriction” Article.

So, to all of you first trimester pregnant women over 40, it is possible for it to be relatively smooth, unfortunately, I make no promises….