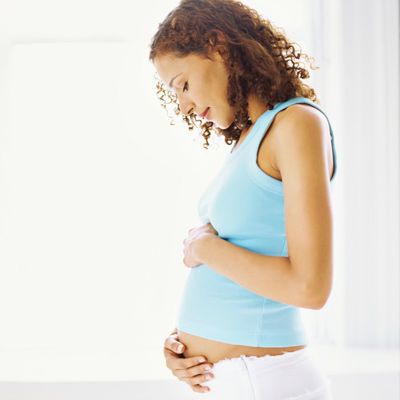 Alas, the second trimester! The second trimester, beginning at 13 weeks, is the time most women can let their guard down regarding spontaneous miscarriages. As you may already know, once you and your baby make it through 12 weeks, the chance of a miscarriage is about 2.5%. This percentage alone is very encouraging, in addition to a significant decrease of morning sickness and fatigue.

Many women experience a renewed sense of energy and relief. However, if you’re over 40, the risk of certain complications is brought to your attention. The most common risks or complications for pregnant women over 40 are:

So with that being said, within the next few weeks into the second trimester, you will be referred to a fetal maternal specialist, strictly because of your age. Pregnancy over 40 years old means that you have the above increased risks, so genetic testing will usually be done by 20 weeks, if not earlier, either by your regular OB or your specialist.

During my initial visit with the Fetal Maternal Specialist, I had an ultrasound and the baby looked good at that point. The specialist did, however, note that despite me not having any specific issues, I was still going to visit the specialist until I delivered because I was over 40. So, in addition to my now monthly visits to my OB, I would also be visiting the specialist monthly during the second (2nd) trimester with increased visits during the third (3rd) trimester. No problem with that, but again, just one of those things that is done because you’re pregnant over 40.

My regular OB actually performed my genetic testing around 18 weeks and the results came back in a little over a week later. Thankfully my all my genetic testing came back normal and the bonus was that they were also able to confirm the gender of baby, which was a boy, with that testing as well. So, for us chromosomal problems was checked off the list and a sense of relief was felt as well.

But why is the genetic testing done in the first place? Well for some couples it’s a matter of knowing that if something is “wrong” with the fetus, then the remainder of the pregnancy gives them time to mentally, emotionally and physically prepare accordingly for their baby. For others, it is an opportunity for them to discuss alternative options other than raising that child.

Regardless, it is strongly suggested to have this genetic testing done as there is an increased statistical risk of babies conceived by men and women over 40 that their babies will have chromosomal problems.

According to Everyday Health the following are risk factors for Gestational Diabetes:

I had four (4) of the risk factors, so I took the glucose test – several times. Again, see my article on “Gestational Diabetes” for my detailed experience with the Glucose Testing and all that comes along with it.

Since I was over 40, the chances of me developing preeclampsia was higher than pregnant women under 40. According to MayoClinic.org, preeclampsia is “a pregnancy complication characterized by high blood pressure and signs of damage to another organ system, most often the liver and kidneys. Preeclampsia usually begins after 20 weeks of pregnancy in women whose blood pressure had been normal. Even a slight rise in blood pressure may be a sign of preeclampsia.

Left untreated, preeclampsia can lead to serious — even fatal — complications for both you and your baby.

I’ve never had an issue with high blood pressure, but that doesn’t matter with preeclampsia. Regardless, my specialist ordered that I begin taking low dose, 81mg aspirin immediately until I had the baby.

I have to say though, I was diligent in taking the aspirin daily, and my blood pressure was consistently in the normal range throughout my pregnancy.

I mean, if you know anything about me, you know that I don’t like “taking” medications, especially on the regular. So, in addition to my prenatal vitamin, I was now taking aspirin on a daily basis in an attempt to prevent me developing preeclampsia.

Placental abruption as defined by WhattoExpect.com is the early separation of the placenta (the fetal support system, which provides baby with nutrients and oxygen from you via the umbilical cord) from the uterine wall during pregnancy, rather than after delivery.

Those most at risk of placental abruption are women who:

The good news though is that there’s a less than 1% chance of a pregnant women experiencing placental abruption. Just know the possible signs and talk to your OB so you know what do in the event that it happens.

Now, the explanation of the medical warnings, risks and complications of pregnancy over 40 was done, I had another pregnancy woe – acid reflux. I didn’t experience acid reflux with my pregnancy almost 16 years ago, so this was new. That sourness in your esophogas is wretched, but it was occurring more and more frequently during this trimester. I won’t go into detail here, but you can visit my article about “Acid Reflux” for the story on that. Just know, that at the end of the day, I was taking prenatal vitamins, low dose aspirin, antacids and Tums pretty much every day beginning this trimester. I ended up taking 150mg of Zantac on a daily basis beginning in my 8th month of pregnancy just to almost avoid it altogether.

Now, when I became pregnant again at  42, my acid reflux came back with a vengeance. This time around was minimally effective so I asked my OB what I could take for relief and she suggested Prilosec. The Prilosec was AMAZING.
I only needed to take Prilosec 2-3 times a week after the acid reflux returned. Now, it did take a about 12 hours for it to kick in, but it lasted several days. When the Prilosec wore off, I would supplement with Tums, again, until the Prilosec began working.

*Please note though, since that time, ZANTAC has been recalled and it is NOT ADVISED that you take ZANTAC, even on the chance that you still see it on the store shelves.

It’s not often that I get constipated but several weeks into my second trimester it hit me! Up until that time and prior to getting pregnant this time, I went at least once a day if not more. But during this trimester I suddenly noticed that I hadn’t gone in a few days. So I drank more water. Consumed more kale blends. Nothing!!! Now this was new – I definitely did not experience this when I was pregnant with my daughter.

Then I ate a bowl a collard greens, which seemed to do the trick. I finally went. But then I didn’t for the next few days. Suffice it to say, I struggled with having regular bowel movements for about a month. I refused to take a laxative of any kind as mother attributed her having my brother prematurely at 6 months to taking laxatives. I followed her warning and just tried to eat as many vegetables as I could to go naturally.

This lasted for about a month or so and then one day I was no longer constipated.

In order to minimize constipation  during pregnancy, the following is suggested by the American Pregnancy Association:

The Good of the Second Trimester

Other than that, I felt great! Excited about being pregnant, but not uncomfortable with being pregnant. With that being the case, this is definitely the time to take any trips, decorate or do those things that you won’t be able to do for a while after the baby is born. After the second trimester, you simply won’t be as comfortable and you’ll likely just be tired and exhausted a lot of the time.

My final suggestion for women who are in their second trimester would be to walk often or do some other form of low impact exercising, at least 30 minutes several times a week. Exercising will simply just make you feel better. Now, you may not want to, but trust me, when you force yourself to do so, you’ll feel so much better overall – especially when swelling tries to creep in during the third trimester.